He was born in NC but was raised in TX until he was 15. He moved to Michigan where he lived until he was 21. Darrell then joined the Army and was stationed in Vincenza Italy for 8 years (we would love to hear stories of his Italian years!) before being reassigned at Ft Benning here in GA. Darrel met his wife, Rachel back in high school in Michigan. They have been married for over 20 years. Darrell and Rachel have 4 children, Caleb, Faith, Darrell and Isabella. Oh! And their furry baby, Oliver, the neighbor’s cat; yes, you read that correctly. Oliver lives with them but is actually the neighbor’s cat. One day, during a thunderstorm, the Staley family let the cat in and she kept coming back after that. They have bought cat dishes and food for her and she stays inside the house most of the time now. Darrell decided to stay in GA after getting out of the Army. He went back to college for computer science gaming technology and worked a security job at night for a couple of years before coming across an ad for a truck driving school, so he put that GI bill to good use and has been driving ever since then. Darrell has been driving with Freedom for four years come this summer. He says he wasn’t cut out for sitting at a desk all day; one of the things Darrell loves most about being a truck driver is traveling and the fact he gets paid to drive all over America and enjoy the views. Some of Darrell’s hobbies are playing soccer (but you’ll never catch him watching the sport. He can’t stand being a spectator!) He also enjoys playing RPG games and watching Japanese anime. When Darrell isn’t on the road, he spends as much time as he can with his wife and kids playing games, watching a movie or anything else, as long as they’re all together! We appreciate the time he sacrifices away from his family to deliver much needed goods to America and we are so glad he is part of our Freedom family! 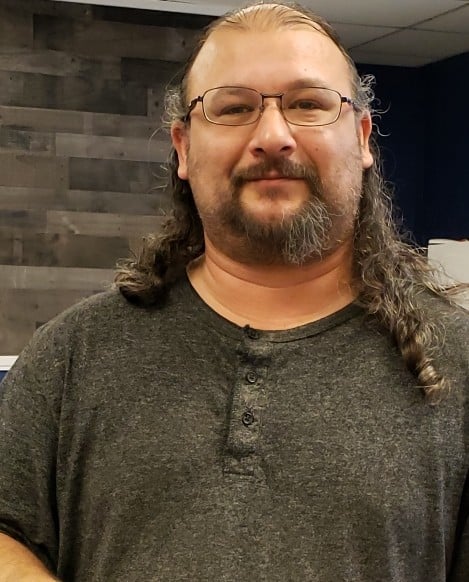